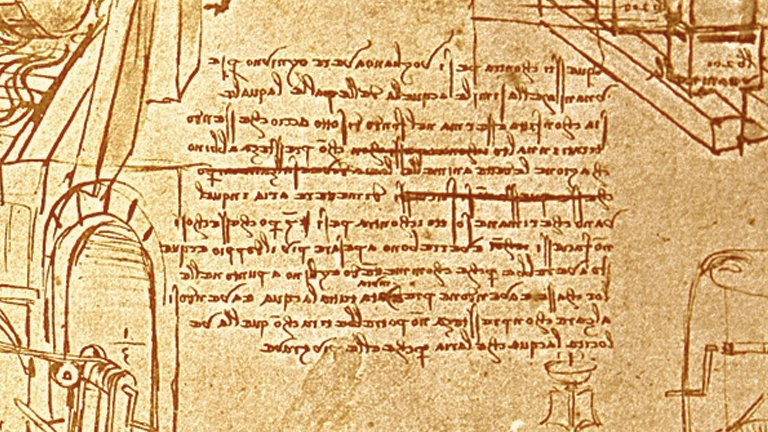 Not only did Leonardo write with a special kind of shorthand that he invented himself, he also mirrored his writing, starting at the right side of the page and moving to the left. Only when he was writing something intended for other people did he write in the normal direction.

The purpose of his mirror writing is unknown, but one idea is that it may have kept his hands clean. People who were contemporaries of Leonardo left records that they saw him write and paint left handed. He also made sketches showing his own left hand at work. As a lefty, this mirrored writing style would have prevented him from smudging his ink as he wrote.

Why do you think Leonardo wrote in reverse?

No one knows the true reason Leonardo used mirror writing, though several possibilities have been suggested:

Type a message below to generate it in Leonardo's style.

Main Idea: Students will experiment with writing backwards as Leonardo did.

Discuss your thoughts and observations about the experience of writing backwards. Did left-handed or right-handed students have an easier time writing backwards? Which medium (pencil, pen, or marker) seemed best for writing backwards? (Leonardo would have written mostly with pen and ink.) For someone who learns to write backwards as easily as they write forwards, what advantages might there be to backwards writing?

From the evidence gathered so far, write down why you think Leonardo wrote backwards. Post these hypotheses where they are visible to everyone. Refer back to these hypotheses as they explore this web site and others and examine published materials to learn more about Leonardo. Different authors will state different opinions about this question but no one knows the truth. Feel free to come up with ideas for experiments to test some of these hypotheses.

If you were given the task of inventing an entirely new written language, which direction would you want it to be written in? Why?